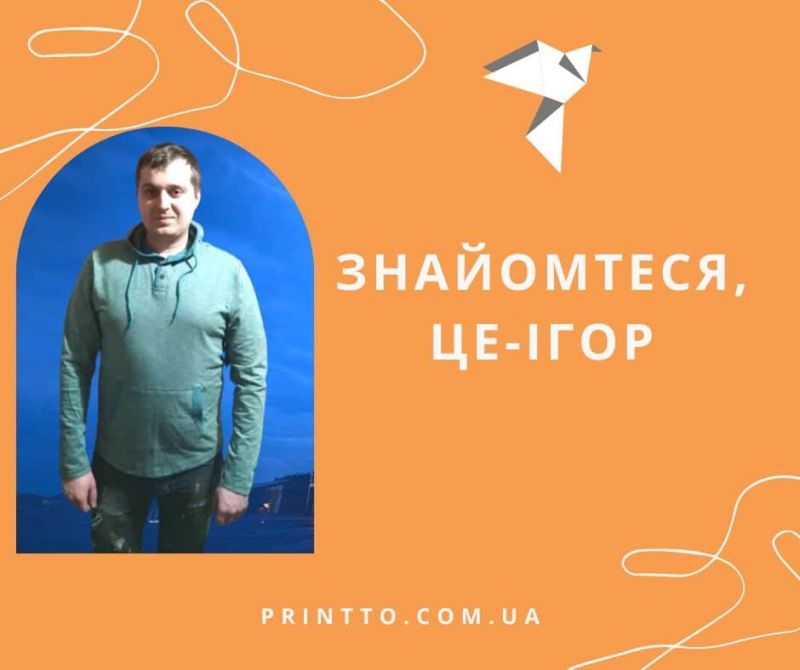 Friends, do you know what the Nike brand logo means? This chubby tick on sneakers, which we recognize from thousands of other ticks? The founder of the brand, Phil Knight, asked the young artist to create a logo that would be associated with a sense of movement. A few weeks later, the girl brought a pile of essays. And the founder chose one among many options. It was a line-shaped emblem that narrowed at the ends and is now known as swoosh. "Swoosh" means a sound that cuts through the air or whistles that occur during rapid movement. Why did I decide to mention the Nike logo? Because my company has its own Nike. This is Igor. Fifteen years ago, he began his career in his parent company. And for two years now actively develops Printto :. From the first day with me! A fast, energetic and very charismatic guy who loves the Nike clothing brand. Therefore in collective, on - friendly, the guy began to be called Nike. And this story is about him. Igor is engaged in printing books on huge and high-speed industrial printers. Responsibility and attention to detail are extremely important here. The guy does his job filigree. Very carefully and meticulously. He has a cheerful disposition and a great sense of humor. It is always easy and pleasant to spend time with him. His team adores Igor studied at the Kyiv Vocational Lyceum and received a specialty - "Car mechanic, turner." That's where such jewelry precision and approach to work comes from. He loves music, walks in Kiev, summer, outdoor recreation and science fiction. Igor, the Nike brand logo is speed, dynamics and energy. All these qualities about you. How does this second name suit you! Printto: Incredibly lucky with an employee like you.

Market - is a new service from Printto: that will allow you to buy books directly from the author. We will print them for you.

Are you a writer, publisher, or copyright owner? Then you to us, we will help you sell books at no cost on your part!